“Now we just can’t, or rather don’t want to, work differently.”

AURA Apart, designed by Da Vinchi Group and Vatmanstudio, is a hotel project in Odessa, Ukraine. The architects faced multiple challenges of a beach location, a seismic zone and difficult terrain during the project, but they managed these challenges using ARCHICAD. The project recently won the European Property Awards. 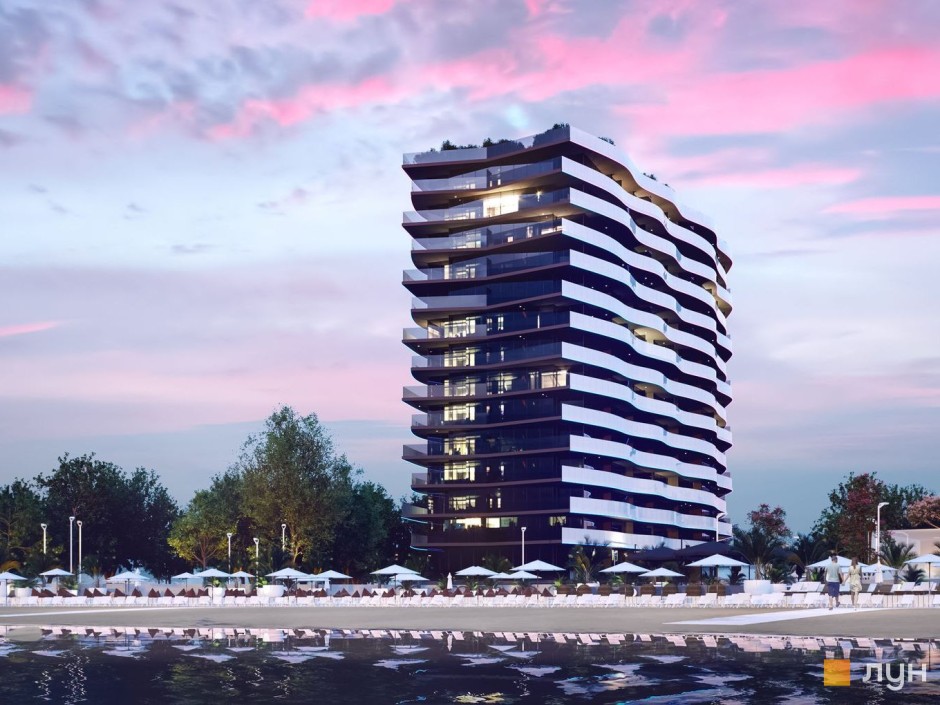 Designers often face a number of requirements that are key to t pt20he success of an entire project. When working on AURA Apart Hotel, Da Vinchi Group and Vatmanstudio faced multiple challenges with a beach location, a seismic zone, and difficult terrain. The founder of the Da Vinchi Group, Sergey Yurets, and BIM Manager, Vitaly Pravdych, spoke about how they managed these challenges and why they used ARCHICAD.

A light façade in harmony with the coast 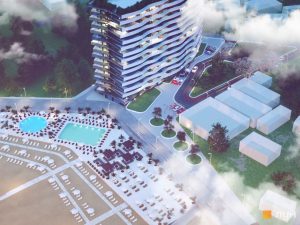 The main task in designing the complex AURA Apart, which began in late 2017, was to create a light façade, which would harmoniously complement the picturesque seascape and coast.”The main task that the architects and designers faced was to give the hotel guests the opportunity to enjoy the views and the seaside climate. And they definitely handled it,” says Sergey Yurets.

Vitaly Pravdych describes the initial challenges the designers faced: “Since the construction was planned for the seacoast, the design had to consider the climate. In addition, the site is located in an active seismic zone — 7 points, which imposes certain structural limitations. Another feature is the complex terrain: the hotel is located on a steep slope.” 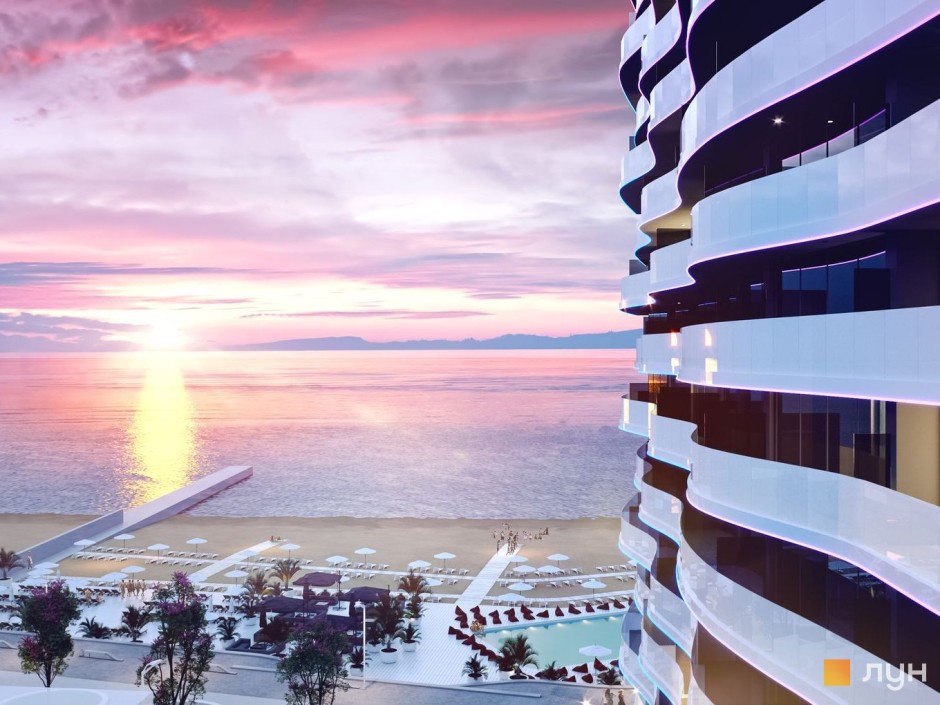 The crucial stage of the project: choosing the right software for the architect
According to the project’s BIM Manager, the arguments in favor of ARCHICAD were the previous practical experience and wide functionality of the program. The specialist notes that ARCHICAD allows you to fill the model with information and then use this information with the help of the automatic construction of façades, sections, elevations and details of the project to determine specifications, to draw up documentation and so on. The entire team of specialists can simultaneously work on the project using a common file, which significantly reduces the design time.
Sergei Yurets believes that “There are quite a few architectural software brands on the market, but the undisputed leaders are ARCHICAD and Revit. For our company, the most convenient software product is ARCHICAD. The modern world is rapidly developing, and new requirements will always appear. So, it is important that software developers respond to them quickly and satisfy users’ requests as much as possible.” In his opinion, the interest of architects in BIM software is consistently growing, and this trend is noticeable at the global level. For example, British government design orders are carried out exclusively using BIM technology, and private companies are gradually moving to BIM design. Therefore, the full use of ARCHICAD as a BIM platform is one of the conditions for competitiveness. 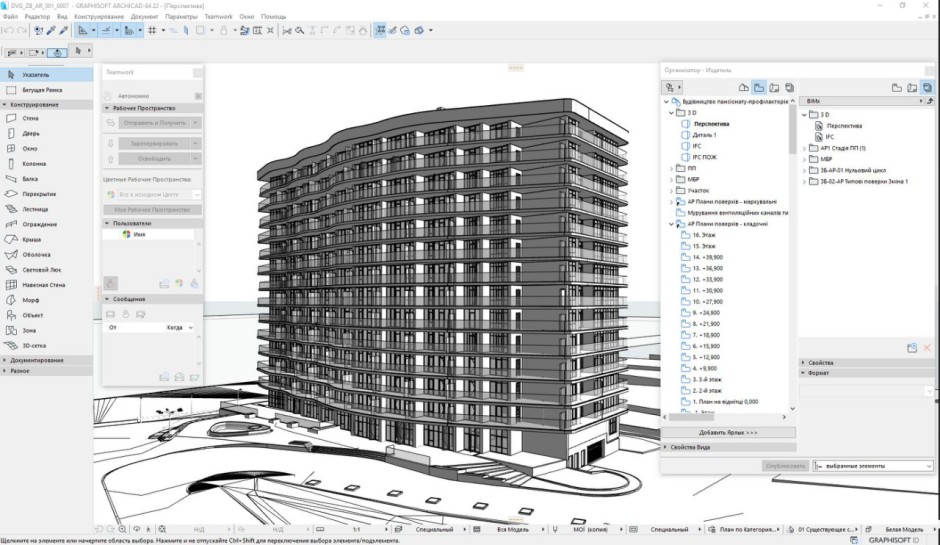 BIM as an opportunity to involve the customer in the design
The Da Vinchi Group started working with BIM in 2018. They start pt20ed with the creation of a pilot team and a BIM Department. The goal was to transition to full 3D design for most sections and maximum automation of design processes.
Sergey Yurets says, “Our company is actively using BIM, and now we simply cannot, or rather do not want to work differently. BIM enables the customer to be involved in the design process, allows them to control all stages of design online and reduces the number of meetings for approvals. As a result, the customer gets exactly what he wants. And the head of the project organization has more time to work with potential customers.”
In turn, Vitaly Pravdych is sure that BIM is an opportunity to avoid unnecessary problems before construction begins. So, when sections of the project are developed separately, there is always a risk of making a mistake. In the consolidated BIM model, the probability of error is minimal, so there are no additional costs when implementing.
“Most of the difficult moments were agreed upon with the customer by demonstrating them in 3D through the BIMx online application.”Vitaly Pravdych, BIM Manager, Da Vinchi Group
The BIM manager explained the practical aspects of implementation saying, “When we faced the first challenges, we realized that we were not using the full functionality of ARCHICAD. We began to study and teach the team, arranged additional courses to improve the level of understanding of the program, and began to master the program’s relationship with Grasshopper. Thanks to these efforts, it was possible to improve the quality of our work and to automate the majority of routine processes. Another task was to combine all sections into one model, despite the fact that the engineering sections were not designed in ARCHICAD. So, we decided to exchange models in the open IFC format.”
BIM technologies have simplified AURA Apart’s design and helped in many ways. For example, when designing engineering networks in an underground parking lot, the team monitored the overall distances from the engineering networks for the passage of cars and checked whether an increase in the height of the parking lot was required. Also, for the positioning of the building, it was necessary to correctly review the terrain and determine where it should be aligned, or where to add steps, etc.
The use of BIMx allowed the customer to get detailed information on every element of the project. Just a click on the object of interest to open key information was needed to decide, such as the materials chosen by the designers, their quantity, as well as the cost. 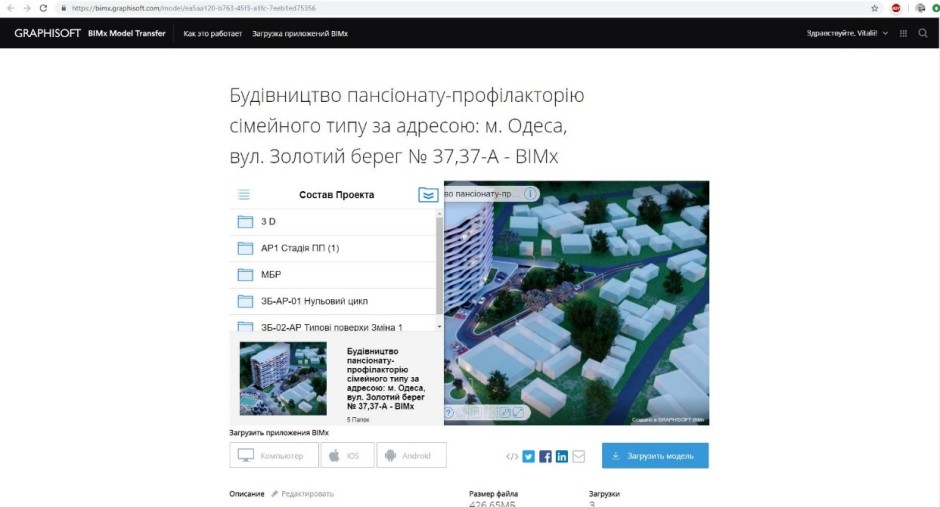 BIMcloud Teamwork: Working as a team
In BIM, the amount of time spent on the project does not change significantly, but the quality of the project improves and its implementation period decreases, which reduces construction costs.
Vitaly Pravdych emphasizes that “When the project was launched, there was a task to quickly implement the earthwork. Therefore, we connected the project in BIMcloud Teamwork, and in the first stages, four architects worked on it simultaneously. They quickly completed the work and preparation tasks for engineers. Thanks to the Teamwork functions, we met the deadlines for the earthwork.”
According to Pravdych, a system of connected modules was used for this project, which was repeated on the floors (glass façade, stairs, ventilation shafts, lintels, etc.); it significantly simplified additional calculations and made the model ‘lighter’. Specially designed GDL-objects were used to design the apartment. 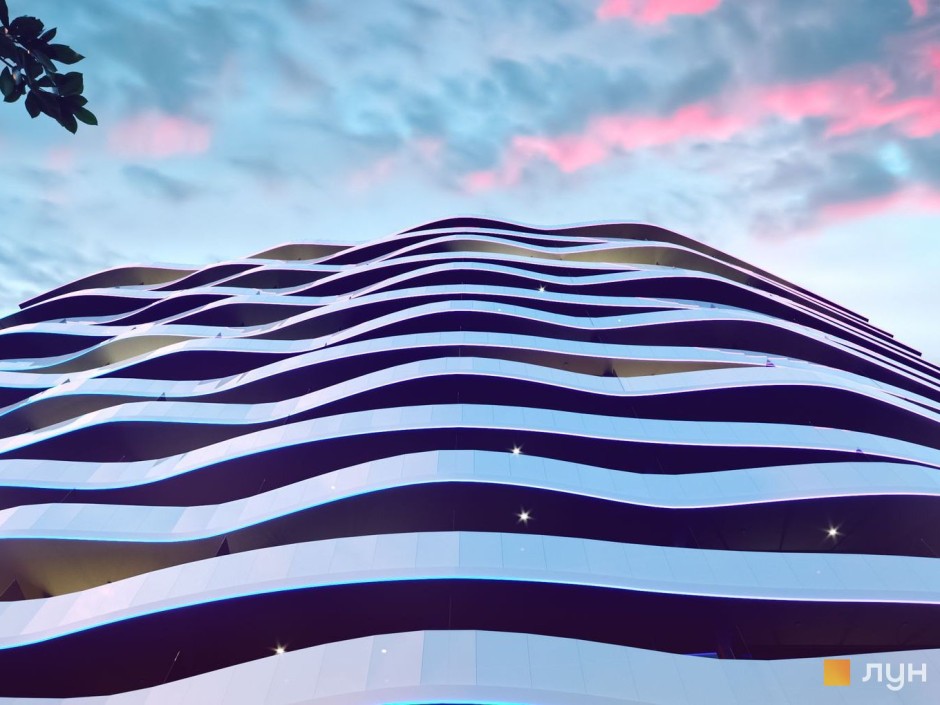 For the convenience of teamwork, the project was divided into several parts: earthwork, ground floor, additional floors, and roof. Further work was carried out in parallel by four groups: architects, engineers, designers and designers from Vatmanstudio. After the mass modeling, engineers and designers were involved in the development, and the project documentation was prepared sequentially by the architects and project designers.
When transferring information, cloud storage was used on the company’s servers that the external designers had access to. Thanks to the universal IFC format, architects who worked on the creation of a 3D model in ARCHICAD could transfer information and set tasks without disruption to the other ones who did their part in Revit and Civil 3D. In the same way, only in reverse order, the completed tasks were transferred to the architects to be added to the BIM model of the building, using the associated IFC modules.

A critical phase of the project: Collision detection
During the development of all sections and the formation of a consolidated BIM model in the ARCHICAD environment, a collision check was performed. This important part of the project used to be carried out manually, which means that the risk, for example, of inconsistencies and collisions among engineering systems during the construction phase were significantly increased. Such errors led to delays and significantly increased the total cost of the project. Now, everything is checked automatically in the ARCHICAD environment: knowing the problem areas, the Da Vinchi Group architects first looked for collisions of engineering systems in the supporting frame of the building and among themselves. The final file marked “for correction” was shared with the other project participants, who each made the adjustments in their own part of the design.
It is notable that the greatest number of collisions was recorded between different engineering systems.

Supervision with BIMx
It is interesting to note that during the work on the project, using ARCHICAD helped not only ineffective communication with the customer but also on the construction site. During construction, the designers’ representatives visited the site and could demonstrate the project or individual parts in 3D on a tablet. In other words, the supervision of the construction was carried out using BIMx, which allowed them to compare the work performed with the BIM model.

The result of the project is the recognition of international experts
The AURA Apart Hotel project has received several international architectural awards, which clearly demonstrate the brilliant work of the designers and the quality of the software that was used during all stages.
“The project was highly appreciated not only by the customer but also by the jury of the European Property Awards in London, receiving awards in the Residential High-rise Architecture Ukraine and Best Apartment Ukraine categories,” added Sergey Yurets.